What Is Accounts Payable Turnover?

Put simply, a company's A/P turnover tracks how quickly a business pays its creditors. To easily quantify and compare this responsiveness over a period of time, A/P staff calculates an accounts payable turnover ratio.

While everybody likes getting paid for their hard work, immediately paying off your creditors as soon as you receive a bill might not always be feasible or even the smartest option. In fact, while pursuing some accounts payable best practices, you might decide to hold off on paying some of your outstanding invoices until just before the due date to keep larger cash reserves on hand for other business purposes.

At the same time, it's particularly nice when you are paid on time — or maybe even a little early. Receiving a prompt payment also helps to build a level of confidence and trust between both parties and increases the likelihood of cooperation — and further business — in the future. Conversely, late or absent payments can quickly erode even the strongest relationships.

Balancing these conflicting motivations is the responsibility of any A/P department, and to help manage this balance, businesses constantly monitor their accounts payable turnover.

Here’s everything that those in accounts payable management need to know to make the best decisions about A/P turnover for their business.

How do you calculate A/P turnover? 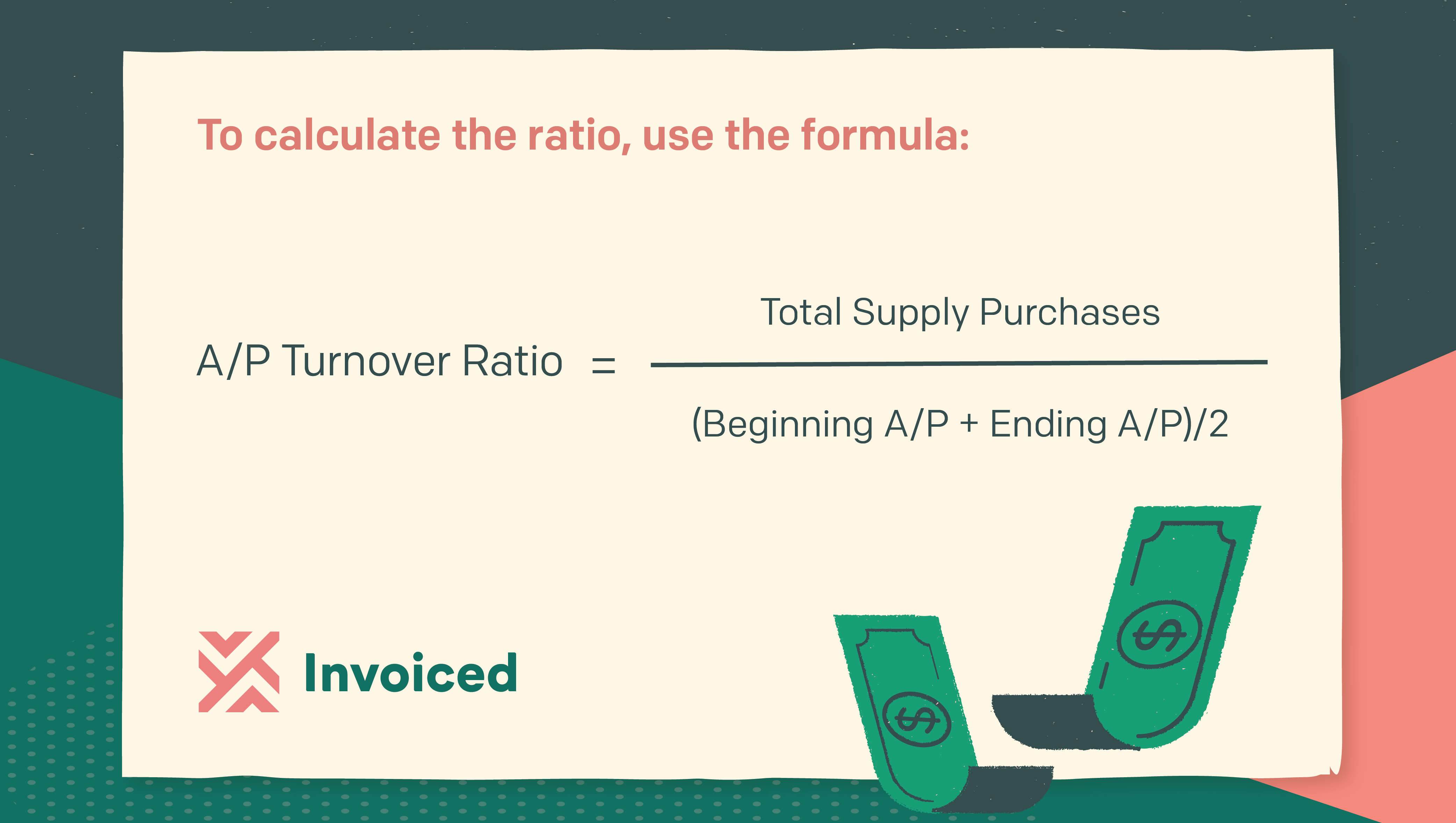 An example of the accounts payable turnover formula in action

So the ratio for this business over the course of 2022 would be:

What is a good accounts payable turnover ratio?

Typically, creditors and suppliers prefer to see a higher turnover ratio since this means that they are more likely to receive their payments early. And a steadily increasing payment rate indicates a healthy, vibrant business with plenty of funds available to pay its debt holders. Conversely, a steadily declining ratio might indicate funding issues or other financial problems within the business.

However, a dip might also indicate growth—particularly if a company was maintaining a larger-than-average cash reserve and had recently spent it to pay for an innovative IT upgrade or to set up a new line of business. Or it might reflect a negotiation with suppliers for a more beneficial payment structure. Meanwhile, a prolonged increase could also suggest management issues, such as a company that is failing to pursue growth or reinvest in its operations sufficiently.

Understanding the limits of the A/P turnover ratio formula

The answer is: it depends.

While an A/P turnover ratio can offer useful insight, particularly for a snapshot of time, you should remember that it doesn't paint the whole picture. And understanding the underlying causes and influences leading to your A/P totals and timing choices will leave you better equipped to make smart decisions for your company.

What was your ratio from the previous accounting period? What is the average in your industry or region? Are you trying to increase your line of credit with a supplier? Do you want to maximize your cash in hand for a large investment? There are a number of factors that could influence what you want your company's ratio to be.

For example, while a 4.5 ratio may seem low, for businesses that work on long-term projects with protracted payment cycles, that ratio might be the industry average. Or it could reflect a dramatic increase from the previous period, demonstrating that the business is rallying after a difficult time.

Altogether, it's advisable to evaluate the progress and underlying causes of these ratios over time, tracking increases and decreases. At the same time, you should also factor other key metrics — e.g., days payable outstanding (DPO), early-discount capture rate, liquidity ratio — into determining the overall financial health of your organization.

Rarely do companies intentionally try to drive down their accounts payable turnover ratios. But as previously outlined, a slowing in payment rates can result due to either positive or negative business reasons, like

In contrast, businesses often want to boost their ratio, particularly when pursuing credit increases or new credit lines. Some measures they might take include:

Mary owns Jalap In Your Business, the best green chili producer in all of New England. The business has been booming, and Mary wants to expand distribution to a few more neighboring states, but that means setting up a new bottling site—not a small investment.

So over the past year, Mary has had the business focus on improving its cash reserves and its overall A/P turnover ratio—ideally positioning Mary's company to negotiate for better credit terms and pricing discounts before the expansion.

This past quarter, Jalap In Your Business spent $240,000 on credit-based transactions, and its average accounts payable balance for that same timeframe was $33,000. So its A/P turnover ratio for this period was 7.3. And in the previous quarter, the business netted one of 6.9.

This higher rate and steady improvement should help Mary pursue her growth plans. However, once the expansion is started, the company's ratio will likely drop since the business will need to balance payment timelines against lower cash reserves better.

Larry owns Chowder This World, the best clam chowder producer in the American Southwest. And Larry has problems. Bad weather had limited the availability of fresh clams for his business, spiking his ingredient costs. And shortly thereafter, a protracted trucker strike further disrupted his incoming and outgoing supply chains, meaning that sales for the past quarter have been much lower than projected.

This limited revenue, in turn, has forced Larry's A/P team to delay payment to some of his suppliers, with some invoices not being fulfilled until after their due date.

Over the previous quarter, Chowder This World spent roughly $175,000 with its suppliers. But its average accounts payable balance for those months was $70,000, yielding an A/P turnover ratio of only 2.5. Meanwhile, the ratio for both of the preceding quarters had been 3.1.

This lower score and overall decline might cause further issues for Larry. In particular, some of his existing suppliers—particularly those that have already experienced a late payment—may be reluctant to make future sales to the company. Similarly, successfully negotiating for better payment terms at the moment seems highly unlikely.

Occasionally, there might be confusion between accounts payable and an accounts receivable turnover ratio. Essentially the inverse of the A/P-focused ratio, the A/R metric instead communicates how effectively a business can collect on the credit it extends to its customers. So instead of contrasting purchases against average A/P, an A/R turnover ratio ranks credit-based sales against outstanding accounts receivable. 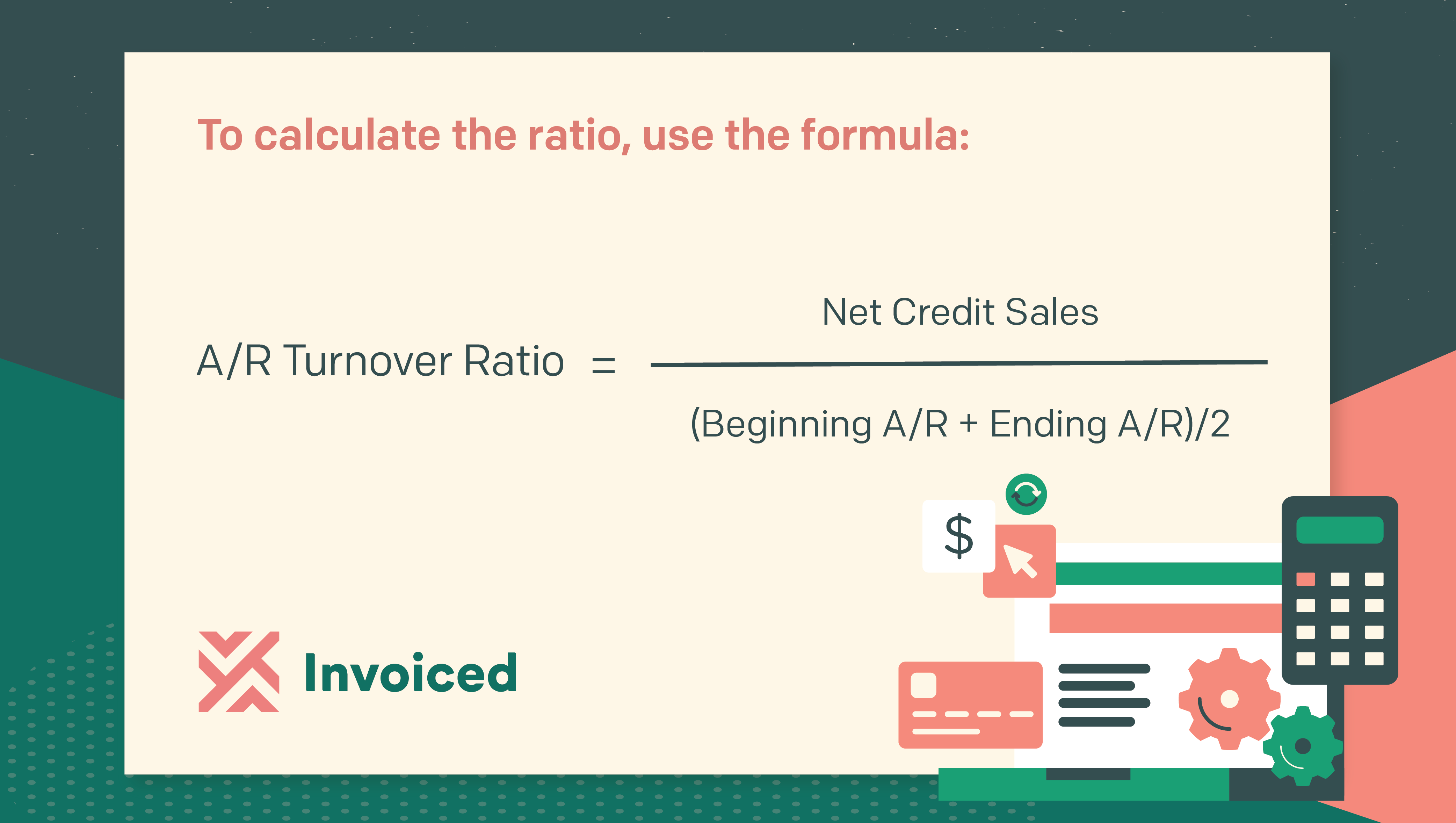 If you'd like to explore further the commonalities and the overall difference between A/P and A/R, explore our Accounts Payable vs. Accounts Receivable blog.

Controlling your payment timeline is critical for effectively managing your accounts payable turnover ratio. And automation offers you the chance to accelerate and fine-tune your A/P efforts by removing process bottlenecks and unnecessary delays. Beyond prompter payments, you can free up key staff for more strategic, long-term work while also reducing the likelihood of potential errors and payment mistakes.

If you'd like to boost your turnover ratio or just make your A/P processes less of a headache, Invoiced’s A/P Automation software can help. Known for our seamless, simple interface, Invoiced provides automation capabilities that can take your business to the next level.

Get started and schedule a demo today! 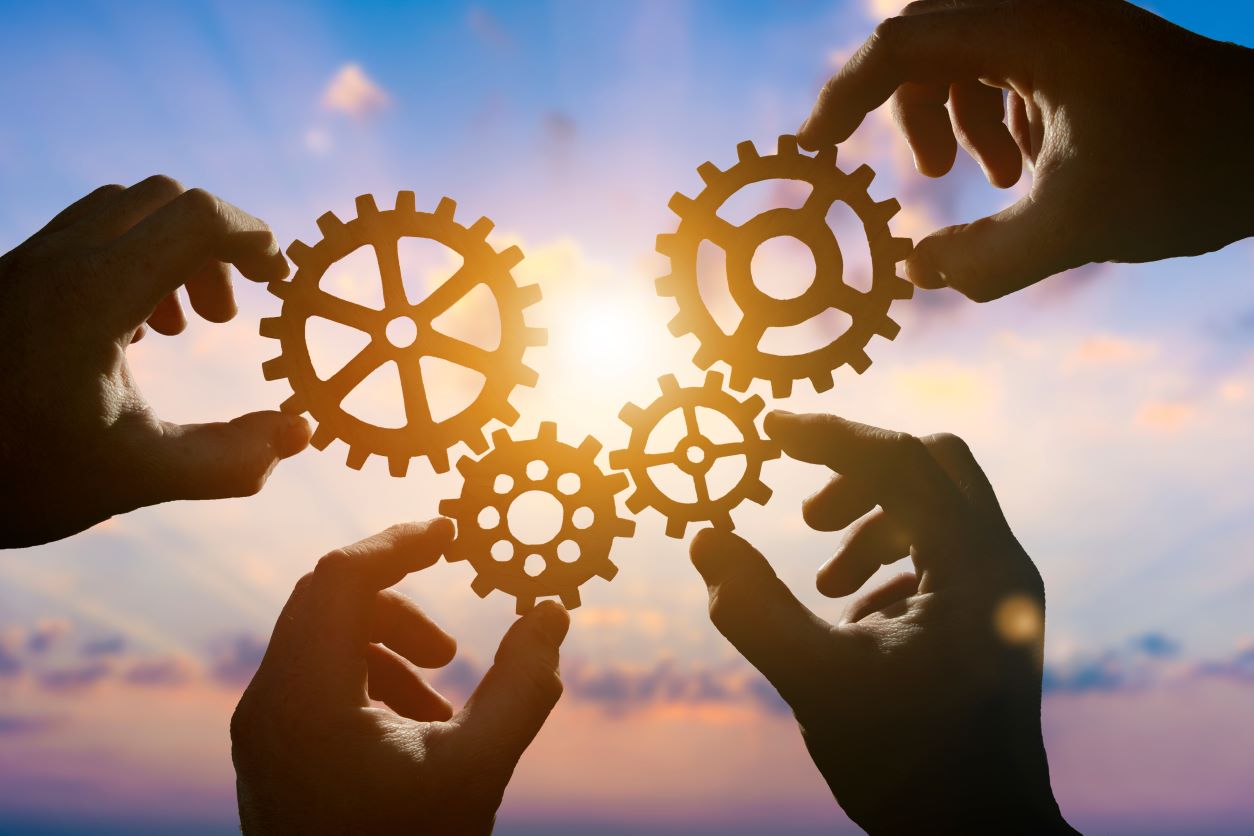 Your step-by-step guide for ensuring timely payments to suppliers and vendors, from invoice data capture, coding invoices, and more.